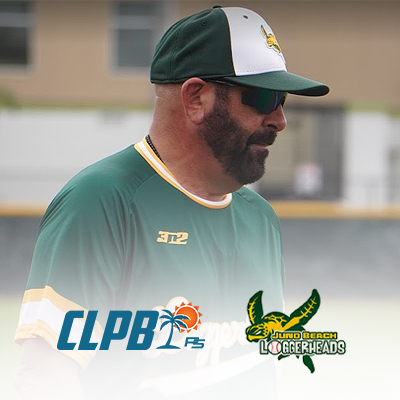 The Collegiate League of the Palm Beaches is excited to welcome back Jay Judson for his 3rd season as manager of the Juno Beach Loggerheads.

Jay was drafted by the Milwaukee Brewers in 1974. Instead of signing with the Brewers he decided to play college baseball. Jay played his collegiate baseball at both American University where he started as a freshman at third base and then went on to transfer to Rutgers University. In 1978, Jay was offered a contract to play professional baseball for the New York Mets. He ended up spending five years in the New York Mets minor league system while spending the last three of those years in Double AA with the Jackson Mets.

After retiring from playing baseball, Jay began his coaching career as Assistant Head Coach for Bergen Community College in Paramus, New Jersey. Jay spent three years as the Assistant Head Coach and ended up taking over as the Head Coach and lead the Bergen Community College baseball program to four regional finals. When Jay decided to move on from Bergen, he was approached by his high school, Dwight School in New York, to take over as the Head Varsity Baseball Coach and ended up leading the Bulldogs to four state titles in a five-year span.

Jay had always wanted the opportunity to coach baseball in Florida, he was eventually able to become the Associate Head Coach at Coral Springs High School where he spent nine years. At the same time, Jay also had started coaching collegiate summer baseball for the South Florida Collegiate League. Prior to joining the CLPB, Jay spent six years as the Head Coach for the Fort Lauderdale Royals and Boca Raton Blazers of the South Florida Collegiate Baseball League. In 2019, Jay officially joined the CLPB as the Head Coach of the Palm Beach Navigators where he ended up leading the team to the league championship that summer. The following year in 2020, Jay took over the Juno Beach Loggerheads and again lead that team to a league championship. Jay returned in the summer of 2021 to coach the Loggerheads and is now in his third year as the Head Coach of the Juno Beach Loggerheads looking to continue his success.

In a brief interview, Jay went on to share these answers on some questions pertaining to the CLPB…

Judson: I have coached in other collegiate leagues, and I just found that the way the CLPB is run is superior compared to those other leagues

Judson:I’m always excited about baseball, working with new players, the new upcoming season, and just always wanting to help players develop. For me it isn’t a job, it’s a passion

Being a coach that has been involved with the CLPB for a few years, what is one thing you have noticed about the league that stands out opposed to other summer leagues?

Judson: The fact that the league is more directed towards the players and their development is a huge difference maker.

Judson: Just keep on helping develop all the players with my knowledge and my assistant coach’s knowledge as well, and then trying to get all of the players to come together as a cohesive group that wants to be together and win together

Fun fact about yourself during your baseball career as a player/coach?

Judson: Going to spring training with the Mets and having to face John Candelaria. He threw three fastballs at 97 mph and it took ten seconds to strike me out