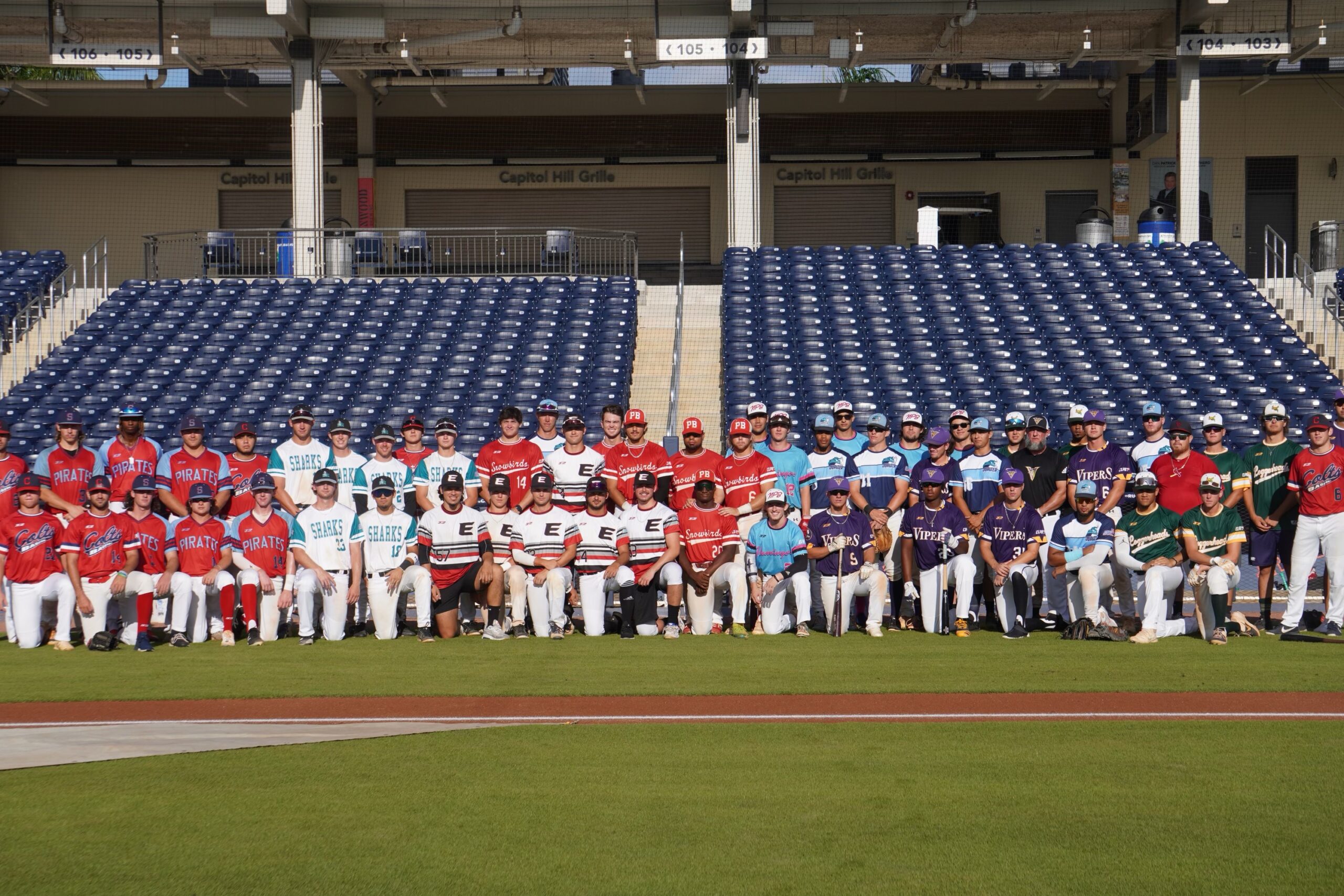 The 2021 CLPB All-Star game was an experience like no other at the Ballpark of the Palm Beaches in West Palm Beach, FL. Pedro Figueroa of the North Palm Beach Flamingos won the MVP after going 1-2, 2 RBI’s and 1 run. Colby Martin of the Wellington Colts came in to pitch in the 6th where he struck out two batters and touched 99.6 mph on a blistering fastball. Thirty players from each division were selected for the All-Star game and got to play not only in a pro-stadium, but in front of professional scouts as well.

The North All-Stars had all cylinders firing on offense on Sunday, winning big over the South All-Stars 11-4. DeeJay Booth scored the first run of the game early for the South off an RBI double to deep leftfield in the top of the 1st inning. It was from there when both teams went back and forth over the next few innings. North Palm Beach Flamingos pitcher Michael Rivera went in for the 2nd inning and struck out the side in order for a 1-2-3 inning in just 17 pitches.

The North got their first runs of the game in the 3rd when Wellington Colts’ Colby Martin hit an RBI single to right field, followed by the next batter Dale Francis of the Vipers hit another RBI single to left field. The game was eventually tied up after a sac-fly by DeeJay Booth in the 4th inning. It was not until the bottom of the 5th when the North ran away with this one.

Neko Capsaliaris of the Vipers hit the go-ahead RBI single in the bottom of the 5th to take the lead for the North. The next batter, Pedro Figueroa, gave his team a bigger lead after he hit a 2-run single to center field. The following inning is when the audience had to deal with both Florida’s summer heat and Colby Martin’s heat on the mound.

Colby Martin came into the top of the 6th to pitch after playing second baseman for the North and went 1-2 with an RBI single. With pro-scouts here to watch, Martin did everything and more on the mound. He struck out his first batter swinging and was sitting around 97-99 mph with his fastball. His curveball displayed a ton of movement ranging from 80-82 mph. The next batter hit a groundout after two pitches, and it was after this when Colby decided to turn it up a notch. With the adrenaline flowing, playing in a professional stadium, Colby Martin touched 99.6 mph on multiple radars pointed at him and struck out his second batter to close out the inning on just 4 pitches: 12 total in the inning.

I got to speak with Martin in the dugout after his outing when he told me, “I knew people were here to watch me; the adrenaline [kicked in] once I got on the mound, started throwing hard,” Martin said. “I found the zone a lot today, so it felt really good.”

When asked about how Martin was able to stay relaxed with all the energy he had going, his response was, “It definitely helped with my own catcher back there [to] just feel more comfortable,” Martin said, “Just pound the zone is really all you got to do, and then once you start pounding the zone, everything else comes naturally.”

From the bottom of the 5th on, the North All-Stars outscored the South 9-2 to close out their 11-4 victory. Michael Pavelchak, Isaias Guzman, and Gavin Bogdanchik all had an RBI to extend the North’s lead. Harry Vargas of the Juno Beach Loggerheads had an RBI single and a sac-fly for the North during their late run. Luis Tuero of the Palm Beach Marlins hit an RBI single in the 8th for the South; which was followed by Tuero stealing for 2nd, and his teammate Roman Thompson of the Palm Beach Snowbirds stole home for the South’s 4th run of the game.

Overall, the 2021 CLPB All-Star game was one to remember for the players, fans, coaches and workers who got to experience the event in-person or through our GameKast livestream.