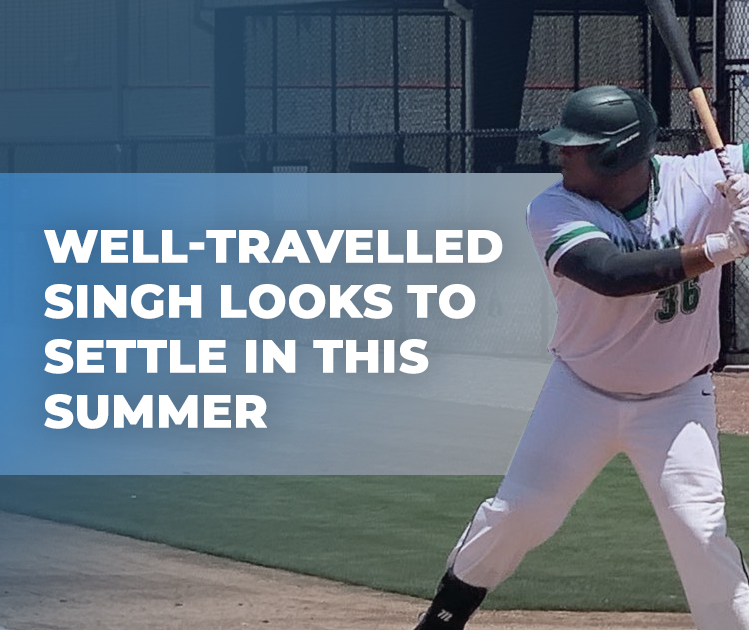 For the vast majority of CLPB athletes this summer, their collegiate baseball journey has just started or about begins in the fall. Most players are using the league as a spring board into their first season at the next level or to improve their skills following their first year. Juno Beach Loggerheads’ first baseman, Korey Singh has experienced the ups and downs of college baseball but has smiled through it all.

Singh’s college road has seen him bounce to three different schools, all in his home state of Virginia. The Midolothian native seemed to have a dream situation in 2017 when he fell in love with the facilities and campus of James Madison University, so much so, that Singh committed before the end of his visit. JMU is a D1 College in the Colonial Athletic Conference.

Unfortunately, that dream situation would turn sour. Despite being promised the starting designated hitter role in the fall, his form fell off. By the end of the 2017 season, Singh never made it into the Dukes’ lineup.

“I got into a lot of extracurriculars that year,” Singh said. “I was 18, I was dumb, I put on some weight… I definitely put most of the blame on myself… At the end of Spring, I knew it wasn’t the environment I wanted to be in, and I needed to get myself out before it got worse.”

With no D1 offers to transfer, Singh took the JUCO route by committing to Patrick Henry Community College. And it turned out to be a great decision as he would once again find his confidence at the plate. Through his first three games, Singh hit two homers and drove in seven runs. At the end of the season, he finished with a .291 batting average, adding 8 home runs and 29 RBIs through 34 games.

“I really got my confidence up [playing under their coaching staff],” Singh explained. “I see a lot of players complaining about JUCO, but I saw some of the best talent I’ve played against in JUCO. You’re competing against guys that played at big schools before.” Singh revealed. He added that he learned a lot about maturity while at Patrick Henry. During that time, he confided to me that PHCC opened his eyes to how much harder he needed to work to outperform others. Before Singh signed on at his next school, he had lost over 20 pounds since his first official weigh-in at James Madison.

The third school on Singh’s road through collegiate baseball took him to Norfolk State, another D1 school in the Mid-Eastern Athletic Conference. In his first season, Singh would make 36 appearances, including 23 starts for the Spartans. But none of those appearances quite matched his first game for NSU, making his Spartans debut against none other than James Madison. Singh noted, “I was preparing myself for that day since the schedule was announced in the fall. I went to bed every night thinking I’m going to show them who I really am.”

Singh finished that game 1 for 2 with a double down the right field line in the third inning. In his first full season there, Singh struggled with nagging injuries. Despite playing through most of the season with a rib injury, he still managed 21 RBIs in his debut season for the Spartans along with a .426 slugging percentage.

Norfolk State is a Historically Black College or University (HBCU), one of four in the state of Virginia. The decision to transfer wasn’t the main reason for attending Norfolk State, but Singh said it influenced his decision. Today, he takes pride in the growing trend of athletes committing to HBCUs over D1 Universities. Recently, basketball forward Makur Maker chose to attend Howard University over UCLA, the highest-profile recruit in any sport to commit to an HBCU.

Singh commented on the signing, saying, “I love it. It’s awesome to see guys want to make a difference. HBCUs have been overlooked, but they’ve had some of the greatest athletes ever. I’m telling you, if they can land one or two top 5-stars to come, they can rival D1 programs just like that. I hope this continues to happen, but I want people to commit for the right reasons, not just to follow a trend.” Singh is a big believer that the level of play at HBCUs is ready to improve in the next five years, which could completely change the college recruiting process.

Fourteen games into his 2nd season at Norfolk State, the season was cancelled, bringing Singh to the Juno Beach Loggerheads. The Loggerheads boast the largest out-of-state roster in the league, including players from Georgia, Minnesota, New York, Texas, and Virginia. Despite the distance between the players, they came together as a team rapidly. Singh explained, “It’s been great. It’s always a little weird when you’re around a team that doesn’t know each other. By the middle of the first game we were all picking each other up, by the end of the second game we were playing like a team.

Juno Beach got off to a poor start, losing to the Vipers and Palm Beach Marlins in their first day, playing both teams back-to-back. Singh revealed that neither loss put the team down, with all players just looking to “get back in the swing of things.” In week two, the Loggerheads bounced back by winning three of the next four games, evening out their record to 3-3. They started week three with a 6-2 win over the Palm Beach Marlins on Monday.

Singh made sure to give plenty of credit to Juno Beach Head Coach Jay Judson, saying, “He’s been working with all of us in the [batting] cages, he really cares about all of us. I think that’s really huge to have in college baseball.” The Loggerheads are in action three more times this week, with the Vipers on Tuesday, the Snowbirds on Thursday, and finishing the week off with the Colts on Friday.