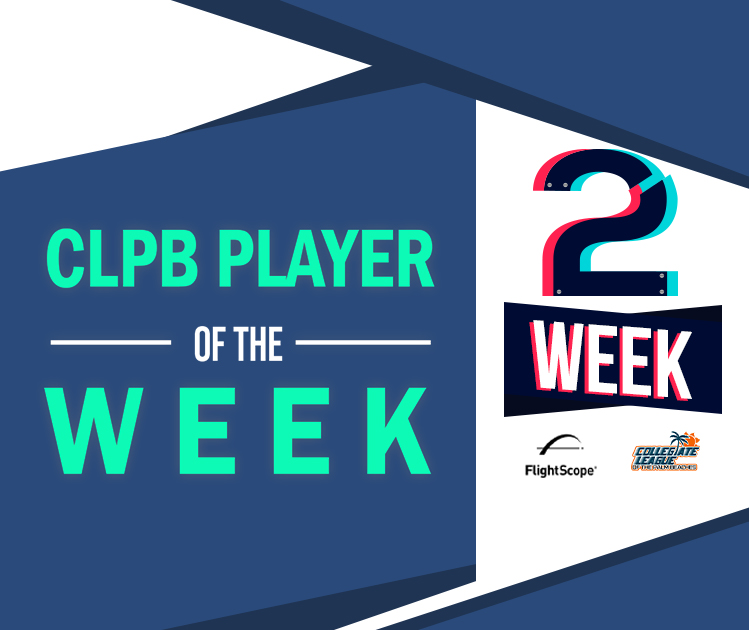 After a commanding week two in the 2020 Collegiate League of the Palm Beaches, the Vipers Baseball Club have ascended to first in the CLPB. The Vipers are currently 4-1 after rattling off four straight wins, including all three this week. While it was a team effort in all of their wins, Steve Proteau’s team got some much needed power from new arrival Tariq Bacon, who takes home this week’s CLPB Player of the Week honors.

“I came out here with a plan to win.” Bacon said post-game on Friday’s win. “I’ve been seeing pitches I can drive, and they’ve been leaving the park.”

Bacon had at least one hit in every game this week, with his lone multi-hit game coming in Monday’s 10-0 win over the Snowbirds. Bacon finished Monday’s game 2/3 with that 3-run HR and a single, which he would later score on. Bacon also walked and stole two bases. His next game seemed to bring him back down to Earth, a modest 1/4 performance in his team’s 9-1 win over Wellington.

Even before the game-clinching home run on Friday, Bacon was making an impact on the base paths for his team. Bacon started the day with two walks and a vital steal in the top 7th, which he would later score on to give his team a late 2-1 lead over the Marlins.

In the top 8th, Bacon would launch a Daniel Rodriguez fastball for a home run to left field, increasing the score to 6-1 Vipers. That home run wound up being the game-winning homer, as the Marlins would muster up three runs in the bottom 8th to fall just short of a comeback. Bacon finished the day 1/2 with 2 RBI’s, 2 R’s, and 2 BB’s.

“We still have a lot of work to do [as a team].” Bacon said, discussing his team’s four-game win streak. “But, we’re going to come out next week and continue to compete, and I think if we keep doing what we’re doing, we’re going to win a lot of ball games.”

The Vipers were the only team to go undefeated in last week’s contests, going 3-0. Bacon started the week with no stats to show for himself, but ended the week as one of the top hitters in the CLPB. Going into week three, Bacon is hitting .444 with 2 home runs, 5 RBI’s, 4 R’s, and 3 stolen bases.

To put that into perspective with the rest of the league, Bacon is now 3rd in average, trailing only Wellington’s C.J. Kayfus (.533) and Mikel Cuvet (.467). Only nine batters in the CLPB have hit home runs this season, but Bacon is the only one with multiple HR’s, leading the league with two. He is also tied with three other batters – teammate Brannon Mondragon, Marlins’ catcher Stephen Perez-Collazo, and Juno Beach Loggerheads outfielder Baylin Moore -, for second in the league in RBI’s.

“Not many guys are 5-tool guys and have the “it factor”, but he has it.” Vipers assistant coach Phillip Russ says in regard to Bacon. “He’s a humble guy, but has a ferocious work ethic. It’s been a pleasure to work with him so far, and I expect a lot of scouts to take notice of him in the near future.”

Bacon, a rising junior at College of Central Florida. In 2019, he hit .293 with 17 RBIs, 15 of which came in non-conference games, His best game was his first 3-RBI game against Lincoln Land Community College, in which he went 3/4 with a single, double, and triple.

The Vipers will be back in action another four times next week, starting with a double-header on Tuesday against the Juno Beach Loggerheads and Wellington Colts at 9:00 A.M. and 1:30 P.M., respectively. After one day off, they’ll meet with the Palm Beach Snowbirds on Thursday’s afternoon game before closing the week against the Palm Beach Marlins on Friday morning.