Nick Argento’s keeps pitching despite battle off the diamond 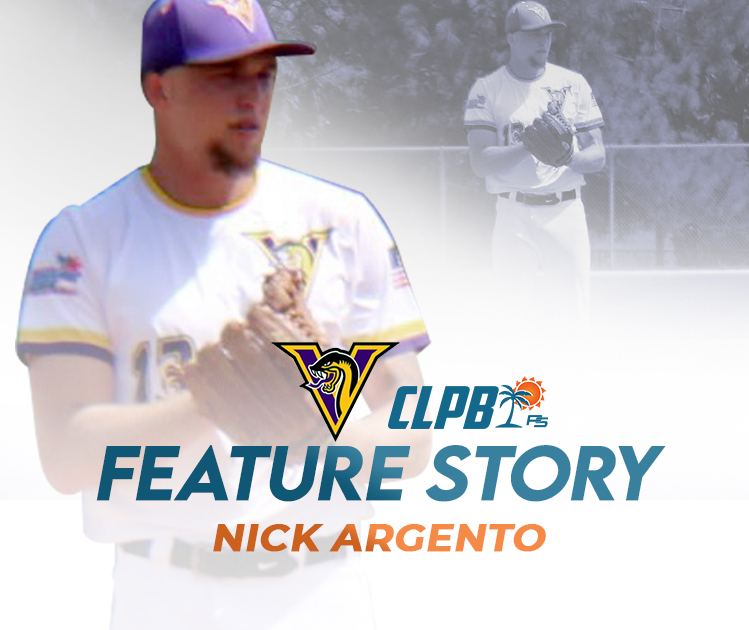 Vipers right-handed pitcher Nick Argento, 22, is not your typical college baseball player. For starters, Argento never played baseball in college and is not currently attending college but besides those things Argento is battling cancer.

Argento was diagnosed with the most severe type of testicular cancer this past April. Argento is currently undergoing a nine-week chemotherapy treatment while also pitching for the Vipers whenever he can.

Pitching for the Vipers this summer allows Argento to socialize since he needs to avoid getting sick because of his weakened immune system.

“Playing baseball is my sanctuary,” Argento said. “It’s the one place where I feel normal and myself and the guys have been a big support group for me.”

Argento found his way onto the Vipers after one of his closest friends and fellow Vipers pitcher, Quinton Romo, recommended him to head coach Steve Proteau.

Romo and Argento met each other in their first season of travel ball when they were in elementary school and remained super close friends ever since.

“Baseball is his escape,” Romo said. “As long as I’ve known Nicky, he’s given the game his all, blood, sweat and tears, everything. When he wants to do something, he’s dedicated to it and doesn’t give up until he achieves what he wants to.”

Argento played baseball from age 4-18 and did have a few offers to play in college but needed a break from the sport, so he took a couple of years away from the sport and training.

Instead of baseball, Argento continued working while taking night classes at Palm Beach State. Argento has been working since he was 14 and eventually found that he did not need school anymore.

Argento has worked as a supervisor for a contracting company and owns his own property management company and he continues to work whenever he can.

Argento went back to baseball training around his 21st birthday as he wants to see where baseball will take him either to playing at the collegiate or professional levels.

Before his diagnosis Argento spent time training at Cressey Sports Performance in Palm Beach Gardens but his training regimen has really changed over the last few months.

“At first I was able to train light weight lots of reps,” Argento said. “But now it’s been really hard to train and even play. I’ve been dealing with a lot of setbacks in chemo, and I’ve been getting sick a lot. So, I’m really going out there, itching and barely being able to train anymore. But every time I get the opportunity when I feel healthy, I make the most of it.”

In his summer campaign, Argento has pitched eight innings over five games, holds a 1-0 record, a 4.50 ERA while striking out 11 batters and walking nine.

“And then once all this happened my velocity dropped and now, I think the hardest I’ve hit this year is like 90 in summer ball and I’ve lost 20 pounds since all this happened,” Argento said. “Right now, I’m just trying to work on my biggest struggle [which] is just walking guys…because my command’s been off.”

Despite Argento’s condition the rest of his teammates are supportive of him on and off the field. Argento mentioned that Romo helped shave his head when his hair was falling out while another Vipers pitcher, Mark Link, takes time to throw with him off the field.

“We know he needs a little more at some point in time when he’s not feeling as well. So, whenever he needs it, we’re there for him,” Vipers pitcher Austin Houk, another close friend of Argento, said.

Argento believes his battle off the field has made him a better person and has given him a new perspective on life.

“It’s almost as if I have a whole new set of eyes,” Argento said. “I just want to maximize it [life] and just be the best person I can be and just live life to the fullest.”