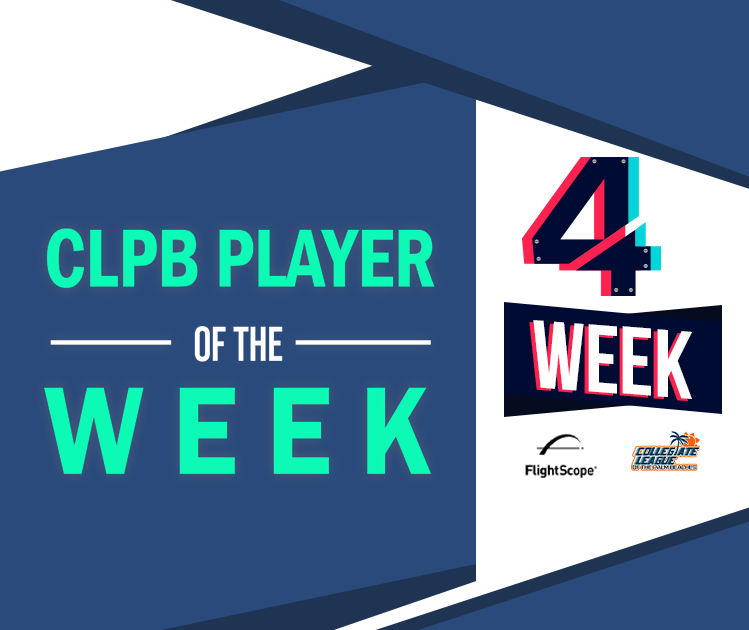 In an action-packed fourth week of the season, the Juno Beach Loggerheads emerged as the best team from last week. Their offense exploded for 22 runs in just three games, including nine runs in each of their final two games to close week four. One of the consistent pieces that was contributing for Head Coach Jay Judson’s team was Mike Malinchak, the Loggerheads’ starting right fielder. He excelled while batting third in all three of Juno Beach’s games last week, taking home the CLPB Player of the Week for week four.

Malinchak, a junior at Pepperdine University in California, was one of three players to have a hit in every game during week four, but was the only player with two multi-hit games last week. Malinchak got on base eight times (6 hits, 2 walks) in 12 plate appearances. Last week, he hit .600 with 3 RBIs and 6 runs, with one stolen base and no strikeouts in addition.

In comparison to the rest of the league, Malinchak led the CLPB in three major hitting metrics. He was the clear first in average with a .600, one of two players to hit over .400. He also led the week in hits with six, beating out Palm Beach Snowbirds’ second baseman Kirkland Festa, who managed five. Malinchak was tied for first in runs with Palm Beach Snowbirds’ infielder Ty Wooten, who played four games last week, whilst Malinchak’s Loggerheads played just three.

Malinchak was instrumental in both of Juno Beach’s wins this week, combining for going 5/8 in his first two games. In the Loggerheads’ 4-1 win over the Vipers to open the week, Malinchak started the week with RBIs in each of his first two at-bats. After lead-off batter Ricardo Alvarez got into scoring position, Malinchak drove him in twice in the first three innings, an RBI single in the top of the first, then an RBI double in the top of the third. Malinchak closed the game going 3/4 with 2 RBIs in a crucial win over the first-placed Vipers.

In each of his final two games this week, Malinchak came across to score three times, leading the league in runs scored with six. Malinchak helped Juno Beach blow the game open against the Palm Beach Snowbirds, going 2/4 with an RBI sac fly, a triple, and three runs.

The win helped move Juno Beach above .500 for the first time this season, moving to 6-5. They would dip back down to 6-6 on Saturday, losing 10-9 in a thrilling seven-inning game with the Palm Beach Marlins. Malinchak struggled in comparison of his first two games, but still managed to hit a double, scoring three times as the Loggerheads overturned a 7-3 deficit to tie the game at 9. He finished 1/2 with 2 walks and 3 runs.

Malinchak enters week four hitting an impressive .353 average with seven RBIs, nine runs, and is on a three game hit streak. The Loggerheads final full week concludes with a Wednesday double-header, visiting the Palm Beach Marlins in the morning with the Wellington Colts at home in the afternoon. They close the week at home against the Palm Beach Snowbirds on Friday Afternoon.