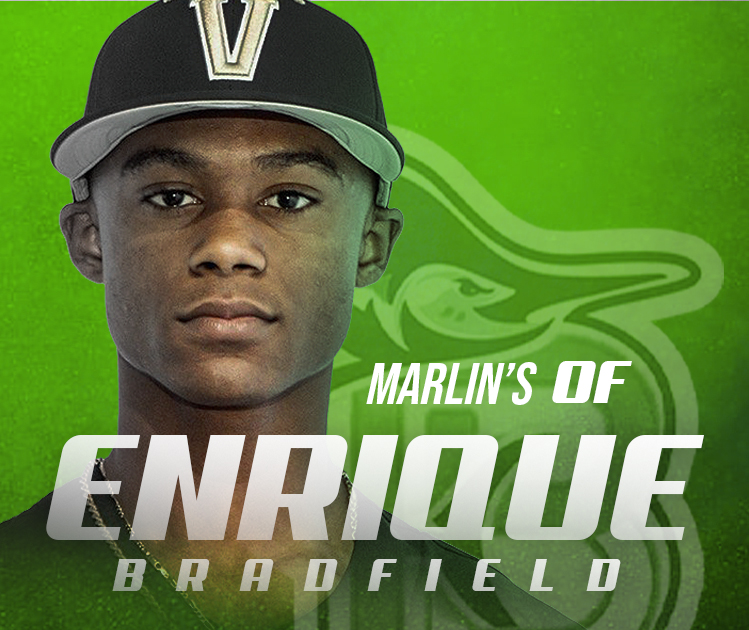 It’s not often that you draw headlines such as “Fastest High Schooler in the Nation” from the Miami Herald, or are listed as some of “The Best Players not taken in Abbreviated 2020 MLB Draft” from ESPN. Outfielder Enrique Bradfield Jr. was the subject of both of these articles, but these major headlines and bold claims haven’t twisted Bradfield’s goals on the diamond; most importantly, being apart of a winning team.

Bradfield graduated this year from American Heritage High School, one of the top baseball schools in a region loaded with talent. Bradfield’s incredible skill on the base paths helped create a name for himself, a name that many top baseball universities would soon salivate after. The Hialeah-born center fielder hit a career .370 at American Heritage to go along with a .491 on-base percentage and 46 stolen bases, including a Sophomore season that saw Bradfield go a perfect 20/20 on steal attempts.

“Everybody knew the speed was there [with me on base], but it was about improving the other things.” Bradfield told me. “It was about learning pitchers’ tendencies… scouting beforehand helped a lot.”

Preparation has been drilled into Bradfield from day one, as the lone Freshman on Varsity in 2016, Heritage Head Coach Bruce Aven stressed scouting and knowing gameplan before every game. These strategies helped Bradfield be selected as a 2018 All-American Outfielder in his Sophomore season.

In his final two seasons, Bradfield missed roughly 40 potential games with an injury in his Junior season and the Coronavirus outbreak this season. Despite those two setbacks, Bradfield found every way to find positives amongst some overwhelming negatives.

“I thought I was in a great spot, I thought I could lead the team from the start [of my junior year]… but that turned out not to be the case. I spent a lot of time with the team, didn’t miss a practice, didn’t miss a game, I wanted to be involved.” Bradfield commented. “I got to sit back, watch a lot of games, learn a lot of things that I wouldn’t have learned about, and it really helped me.”

Bradfield came back ahead of schedule to hit .562 in his abbreviated 2019. Bradfield also drew seven walks and mashed his first career home run against Wellington in late April. Bradfield also admitted he learned a lot more leadership qualities helping out some of the younger players on Varsity.

He also admitted to feeling frustrated after the 2020 season was cancelled. Bradfield’s Patriots were 10-0, and he was disappointed he couldn’t see out the season with his teammates. Instead, Bradfield immediately upped his workout routine, working out 3-4 hours every day, to get his body in shape for college.

Bradfield chose to commit to Vanderbilt, beating out other baseball powerhouses Miami, Florida, and LSU. The Commodores have produced several top draft picks this past decade, including 2015 first overall pick Dansby Swanson as well as this year’s fifth overall pick, CF Austin Martin.

“Coach [Tim] Corbin has built a culture that players have bought into.” Bradfield said. “He truly cares about his players… I wanted just as much care off the field as on the field, and he showed me that he could be someone I wanted in my life. That’s what makes Vanderbilt special.”

Despite Martin’s departure, Bradfield knows that the competition at Vanderbilt to start will be intense. He acknowledged that while he wants to go in and start, he knows what’s best for the team is most important, and is prepared to be patient to wait for his chance. Regardless, don’t be surprised to see Bradfield’s name a couple of times this season in the SEC.

Starting this coming week, Bradfield will be playing his baseball for the Palm Beach Marlins here in the CLPB. Bradfield will play under Head Coach Alex Gonzalez, who has coached the outfielder on several occasions. Bradfield will also play with former high school teammate Luis Castillo Jr.

“I’m excited about the competition,” Bradfield stated. “I think that the other teams can give me a great challenge, and I’m looking forward to see what we can do as a team.”

Bradfield also is on the lookout to improve his long ball this season, something that he wanted to improve to help his overall game. Whether it’s his contact hitting, his speed on the base paths, or his outspoken defense, Enrique Bradfield is one of the top names to keep an eye out for, both in the CLPB and for the future.