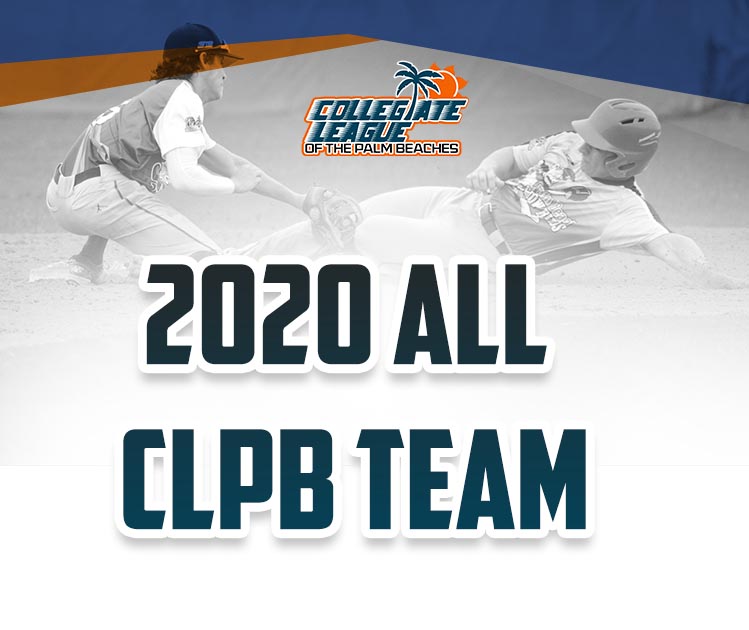 The 2020 season of the Collegiate League of the Palm Beaches concluded last Tuesday, ending with one of the most narrow finishes in league history. The league format was slightly different this season, a shortened, one-month schedule with no playoff games, but that didn’t stop this season’s players from showing their best stuff. Without any further ado, here are the selections (made by the coaches of the 2020 CLPB) for the 2020 CLPB All-League Team.

Catcher: Shane Magrann, Juno Beach Loggerheads
Season stats: 13 appearances, .320, 0 HRs, 7 RBIs, 6 Rs, 12 BB’s, 4 K’s
Starting with one of the two teams that shared the CLPB crown, Loggerheads catcher Shane Magrann led by example throughout the season, recording 2 RBIs in his first start of the season against the Palm Beach Marlins. Detrimental to team success this season, Magrann was involved with at least one run in each of his final five games, all Loggerheads wins. He closed the season with a .320 average, second-best amongst catchers. Magrann returns to South Florida State for his junior season in 2021.

First Baseman: C.J. Kayfus, Wellington Colts
Season stats: 13 appearances, .471, 1 HR, 11 RBIs, 10 Rs, 9 BB’s, 6 K’s
University of Miami commit C.J. Kayfus has been one of the most talked-about baseball prospects in Florida, showing exactly why in the 2020 CLPB. Kayfus led the league in average at .471, with his 12-game hit streak easily the longest in the CLPB this season. He finished the season with four multi-RBI games, the only player this season to do so. The Wellington native was also one of four players to record 10+ RBI and 10+ runs scored across the season.

Second Baseman: Kirkland Festa, Palm Beach Snowbirds
Season Stats: 13 appearances, .268, 0 HRs, 2 RBIs, 5 Rs, 3 BB’s, 12 K’s
One of the elder players from this season, New Jersey native Kirkland Festa was one of the league’s top lead-off batters. Despite missing his team’s first two games, Festa began his season on a four-game hit streak, including a walk-off triple against the Wellington Colts on July 13th. Festa finished that game 2/3 at the plate, one of three multi-hit games this season. Festa closed the season with RBIs in each of his last two games.

Shortstop: Edgar Perez Jr., Juno Beach Loggerheads
Season stats: 15 appearances, .385, 0 HRs, 8 RBIs, 9 Rs, 8 BB’s, 9 K’s
Edgar Perez was one of the league’s most well-rounded hitters, edging out a narrow vote for the shortstop spot. Perez’ cool .385 average came with five multi-hit games, tied for the most in the CLPB. Three of those multi-hit games came amongst a 7-game hit streak for the Loggerheads, the longest hit-streak for a Juno Beach player. Perez will play as a redshirt sophomore for Palm Beach State University in 2021.

Designated Hitter: Raynel Ortiz, Vipers Baseball Club
Season Stats: 13 appearances, .385, 0 HRs, 5 RBIs, 4 Rs, 5 BB’s, 4 K’s
The designated hitter position was divided amongst five batters that either flipped positions during the season, or were just shy of the three nominees for each position. After platooning between first base and right field, Vipers’ Raynel Ortiz won the vote for DH. Despite a cold start to the season, recording just two hits in his first five games, Ortiz went on a tear in the second half of the season. His best stretch came from July 16th through the 30th, when Ortiz had four two-hit games in seven appearances. Ortiz finished the season tied for second in average with Juno Beach SS Edgar Perez.

Outfield: Enrique Bradfield Jr., Palm Beach Marlins
Season Stats: 16 appearances, .340, 1 HR, 11 RBIs, 13 Rs, 11 BB’s, 6 K’s
The outfielder that received the most votes this season was Marlins’ center fielder Enrique Bradfield. The Vanderbilt commit hit an astounding .340, with five multi-hit games, seven extra base hits, and recorded one of two inside-the-park home runs hit this season in an 11-9 win over the Juno Beach Loggerheads. One of the standout parts of Bradfield’s game was his speed, showcased across 20 stolen bases in 16 games, easily taking home the stolen base crown by a margin of nine stolen bases. Bradfield stole multiple bases in a game six times, including four stolen bases in a 5-0 Marlins win against the Palm Beach Snowbirds on July 15th.

Outfield: Casey Asman, Juno Beach Loggerheads
Season Stats: 16 appearances, .381, 0 HRs, 11 RBIs, 8 Rs, 8 BB’s, 9 K’s
Florida State Seminoles transfer Casey Asman was one of the most dynamite players in the second half of the season, leading the Loggerheads to a split of first place. Asman closed the 2020 campaign on a seven-game hit streak, recording 8 RBIs across that finish. He recorded a season-high four RBIs against the Snowbirds on July 24th, had the game-winning RBI single against the Vipers four days later, and went 2/2 with 2 RBIs on closing day, helping to seal Juno Beach’s position in 1st. He finished the season in a four-way tie for first for total hits, fourth in average, and tied for third in RBIs.

Outfield: Brannon Mondragon, Vipers Baseball Club
Season Stats: 16 appearances, .304, 2 HRs, 13 RBIs, 10 Rs, 9 BB’s, 12 K’s
One of the smallest players in the 2020 CLPB season, Vipers’ center fielder Brannon Mondragon was one of his team’s most prolific hitters. Mondragon led the team in home runs, runs batted in, and was second in runs scored, holding down a position of 3rd or 4th in the batting order all season. He started the season with RBIs in each of his first four games, including one of three multi-RBI games against the Loggerheads in the Vipers’ first win of the season. His best day came on July 14th; playing in both games of a Vipers’ double-header, Mondragon homered in each of his team’s games that day, going 3/4 with 3 RBI’s in the morning and 1/2 with a solo HR in the afternoon. Mondragon will start his Sophomore season at Palm Beach State College in 2020-21.

Starting Pitcher: Tibur Rivero, Vipers Baseball Club
Season Stats: 6 appearances (3 starts), 21.1 IP, 1-1, 0.42 ERA, 7 BB’s, 25 K’s
Taking home the most votes amongst pitchers, Vipers’ ace Tibur Rivero was one of the most dominant faces on the mound this season. Rivero, a rising Sophomore at Indian River State, gave up just one earned run all season, coming in his final outing, which he pitched a complete 7.0 IP in a 3-1 win over the Snowbirds. In every game that Rivero pitched at least 1.0 IP, Rivero recorded at least five strikeouts. In his three starts, Rivero allowed just four hits, the best amongst starters.

Starting Pitcher: Garrett Parkins, Wellington Colts
Season Stats: 6 appearances (2 starts), 13.0 IP, 0-0, 2.00 ERA, 4 BB’s, 22 K’s
Taking home one of the best BB/K ratios in the 2020 season, Garrett Parkins is the second pitcher selected. Parkins threw 10.0 IP of shutout baseball this season, never giving up more than one run, earned or unearned, in an inning. Parkins combined for nine strikeouts in his first 4.0 IP, including five in his first outing against the Palm Beach Snowbirds. In his final outing, Parkins struck out a season-high seven batters against the Vipers, the only pitcher to achieve that this season.

Starting Pitcher: Jared Donalson, Juno Beach Loggerheads
Season Stats: 5 appearances (3 starts), 16.2 IP, 1-0, 1.62 ERA, 12 BB’s, 17 K’s
Arguably the best two-way player in the CLPB this season, Loggerheads SP/3B Jared Donalson is the final starter selected for the All-League Team. Donalson would allow runs in two of three starts, but limited damage in all outings, only giving up a maximum of two runs in pitching appearances. Donalson was also a solid reliever, with his best outing coming in his lone win of the season, giving up just 2 hits in 3.0 IP in a come-from-behind win over Wellington.

Relief Pitcher: Bryan Ariza, Vipers Baseball Club
Season Stats: 8 appearances, 27.0 IP, 2-0, 2.33 ERA, 10 BB’s, 36 K’s
After redshirting his first season at Palm Beach State, Bryan Ariza came into the CLPB with plenty of confidence on the mound. Ariza finished as the top strikeout pitcher in the league, striking out 36 batters, finishing with three more than Juno Beach’s Rich Pfluger. His best performance came against the Snowbirds on July 16th, when Ariza pitched a complete-game shutout, striking out 7 in an 8-0 win. That performance pushed him to winning the CLPB Player of the Week, the only pitcher this season to be named Player of the Week.

Relief Pitcher: Anthony Figueroa, Palm Beach Marlins
Season Stats: 4 appearances, 11.0 IP, 0-1, 1.63 ERA, 14 BB’s, 14 K’s
Anthony Figueroa was one of the top arms out of Alex Gonzalez’ bullpen this year, giving up just two earned runs in 11 innings of work. He was masterful at keeping batters at bay, allowing fewer than one hit in three of his four outings. The Miami-Dade College commit closed the season in superb style, striking out four batters in three shutout innings against the Juno Beach Loggerheads.